See all Restaurants in Hong Kong

That's what NYPD Pizza is staking its reputation on – and its reputation comes away mostly intact. NYPD opened a couple of months back on a dead-end street in Quarry Bay, a stretch more automotive than culinary. This hasn't stopped the worker bees from One Island East seeking it out. It is NYPD's first foray into the Hong Kong market after previously setting up shop in Shenzhen. The digs are more suited for takeaway than eating in, with only a smattering of seats. The interior resembles what you would see behind a Pizza Hut counter, although the results here are better. The 9" New York Supreme, featuring pepperoni, Italian sausage, ham, onion, mushroom, black olives and green pepper cost $88. Not wanting to give short shrift to the rest of the menu you could also order the four-piece chicken wings for $20 and a smoked turkey hero sandwich $35. The pizza comes out piping hot after about a 20-minute wait, having been cooked in a conveyor belt oven. Surprisingly, most of the toppings were actually buried under the cheese: mozzarella with a hint of cheddar that comes out nice and bubbly. The sausage was a highlight, seemingly homemade with a nice garlic flavour and flecks of fennel. The sauce was muted, adding only a faint herbiness to the proceedings. The cornizone, or rim of the pizza, came out nicely blistered. The crunchy exterior gave way to a chewy interior. It's obvious someone understands the necessary interplay between flour and water, although the bottom of a couple of the bigger slices you will find undercooked gummy dough. Overall it was a step up from the chains around town, but it wasn't revelatory, and if you have to make an effort to some all the way for "New York-style" pizza. Then you'll be disappointed. Though everything is made to order, which has its merits, but is not what you'd find in a typical New York pizza joint, and there were no by-the-slice choices. Those hoping to grab a quick slice from an array of options and fold it before you're out the door will be disappointed. Unfortunately there was a minimal amount of sad-looking turkey hiding under some melted cheddar cheese. The bun to meat/cheese ratio was simply off. In a town with people are mad for pizza but hardly spoiled for choice, NYPD is a welcome addition. But know that the experience is more Hong Kong than New York. 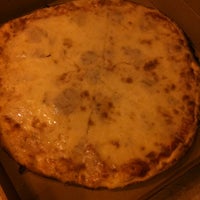 If you have been to NYPD Pizza, share your experience