See all Museums in Guangzhou

The Panyu Museum, located at the eastern foot of the Turtle Hillock on Yinping Road in Panyu District, is a well-equipped district government affiliated museum, ranking among Panyu's top eight tourist attractions. Sitting on a site of 16 hectares, the museum consists of three parts, including a multi-functional main building for exhibit displaying purposes and the site of the Eastern Han Dynasty tombs. The multi-functional main building is Panyu's landmark building. The museum provides nine general exhibitions and thematic exhibitions. 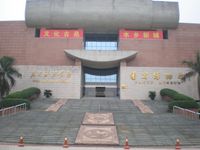 If you have been to Panyu Museum, share your experience

Top things to do in Guangzhou

Best places to eat in Guangzhou

Must see in Guangzhou