Paramount is the only major studio still located in Hollywood, which makes the 2-hour "cart tour" around its Hollywood headquarters far more historically enriching than the modern studios in Burbank (even the wrought-iron gates Gloria Swanson motored through in Sunset Boulevard are still there). The tour is both a historical ode to filmmaking and a real-life, behind-the-scenes look at a working movie and television facilities in day-to-day operation; ergo, no two tours are alike, and chances of spotting a celebrity are pretty good. Visits typically include a walk-through of the soundstages of TV shows or feature films, though you can't enter while taping is taking place. The $35 tours depart Monday through Friday by advance reservations only. You need to be 12 or older to take the tour, and cameras and recording equipment are verboten. Tip: After the tour, have lunch at the Paramount Studio's world-famous commissary; you never know who might drop in for a bite, and the food's pretty darn good. 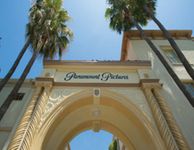 If you have been to Paramount Pictures, share your experience