The  Peppara Wildlife Sanctuary  constitutes the catchments of the Peppara Dam on the  Karamana River  near  Thiruvananthapuram ,  India. Considering the ecological significance of the area, it was declared a sanctuary in 1983.  Recently, a joint effort has been made by  Kerala  Tourism with the State Forest Department and the Kerala Water Authority to beautify the dam site . The sanctuary has a rich population of mammalian fauna and is emerging as a big attraction to wildlife enthusiasts and ornithologists. 43 species of mammals, 233 species of birds, 46 species of reptiles, 13 species of amphibians and 27 species of fishes are reported from the sanctuary. The common mammals found are  Tiger ,  Leopard ,  Sloth Bear ,  Elephant ,  Sambar (deer) ,  Bonnet Macaque ,  Nilgiri Langur ,  Nilgiri Tahr 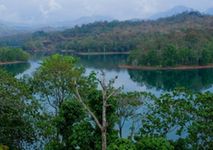 If you have been to Peppara Wildlife Sanctuary, share your experience