See all Temples in Bhuj

Pragmahal Palace. The palace of rulers of Kutchh region. Maharao Pragmalji initiated the creation of this palace.  Prag Mahal is named after Rao  Pragmalji II , who commissioned it and construction began in 1865.   It was designed by Colonel  Henry Saint Wilkins  in the  Italian Gothic  style,  and many Italian artisans were involved in its construction.   The palace artisans' wages were paid in gold coins. 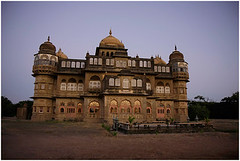 If you have been to Pragmahal Palace, share your experience

Top things to do in Bhuj

Best places to eat in Bhuj

Must see in Bhuj