Rani Charak Mahal is one of the famous historic testimonies, located on the banks of the River Tawi. A part of the Mubarak Mandi Complex, the ancient monument houses several government offices in its premises. Built of red stone, the mahal was constructed over 150 years ago. The monument is connected with treasury house, also known as Toshakhana of the Mubarak Mandi Palace. Arches and columns illustrate the architectural style predominant during that era. There are several valuables housed in the palace, which include artefacts like antique idols, a golden throne, palanquins and utensils. 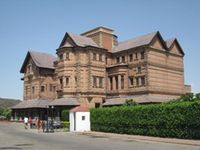 If you have been to Rani Charak Mahal, share your experience

Top things to do in Jammu

Best places to eat in Jammu

Must see in Jammu