See all Monuments in Macau

Ruins of St. Pau's refers to the ruins of a 16th century complex in Macau including of what was originally St. Paul's College and the Cathedral of St. Paul also known as âMater Deiâ, a 17th century Portuguese cathedral dedicated to Saint Paul the Apostle. The church was built from 1602 to 1637. In 1835, a fire burned it to the ground, leaving only the faÃ§ade, the staircase and portions of a wall. It remained unchanged until a restoration was undertaken and completed in the summer of 1991.That faÃ§ade is crowned by the cross of Jerusalem, below which are three tiers with niches containing statues that were cast from bronze, at a local cannon and bell factory. Ruins of St .  Paul's Cathedral , Macau  The way to this place one can see small  shops  that sells foods souvenirs and Gift. 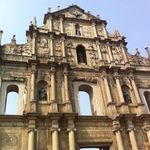 If you have been to Ruins of St. Paul's Cathedral, share your experience