See all Things to do in Coffs Harbour

The Segway tours and fun rides are run by a company called Time Out Adventures (formerly Time Out Xperiences). They are based at Novotel Pacific Bay Resort in Coffs Harbour.In Australia, Segways aren't allowed on public roads or cycle/footpaths (yet), but Time Out Adventures has found a great location at Pac Bay Resort where there's more than enough space to keep you interested and challenged for at least an hour.The area includes an obstacle course as well as paved paths and dirt tracks around the resort, large grassy fields and plenty of bumps and hills for lots of fun and thrills. 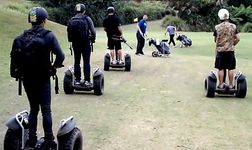 If you have been to Segway tours, share your experience

Top things to do in Coffs Harbour

Must see in Coffs Harbour