The snow capped lands of Ladakh is popular for its trekking trails, Yak safaris and breathtaking monasteries. However, contrary to the general belief that camel safaris are available only in the hot deserts region of Rajasthan only, there is camel safaris carried out in the cold deserts of Ladakh also. This is one memorable experience of exploring the rugged. Camel is a gentle giant that has proved to be the lifeline for the desert people by serving as the major mode of transportation in deserts. Their thick hides protect them from the harsh heat prevalent in the desert. 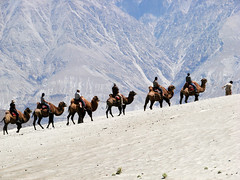 If you have been to Shaggy Double Hump Camel, share your experience