The minarets of this mosque have the remarkable feature that if one of the minarets is shaken then within few seconds other also begins to shake. One explanation for this phenomena is that the vibrations at the base of tower gets amplified and are transmitted through air tunnels between the two towers resulting in shaking of other tower. Surprisingly, no tremble is felt in the connecting passageway between the two minarets. 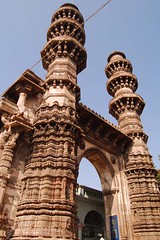 If you have been to Shaking Minarets, share your experience