The Sharjah Museum of Islamic Civilization is a museum in Sharjah, United Arab Emirates. The museum, opened in 2008, covers Islamic culture, with more than 5,000 artifacts from the Islamic world. Objects include calligraphy, carvings, ceramics, coins, glass, manuscripts, metalwork, and scientific instruments.
The museum is located on the Corniche Street in the al-Majjarah area, on the opposite side of the street from Sharjah Creek. It is very visible because of its large size and golden dome. The museum is situated in the historical centre of Sharjah on the Majarrah Waterfront. It was originally a traditional souq (indoor market).His Highness Sheikh Dr Sultan bin Mohamed Al-Qasimi, a member of the Supreme Council and ruler of Sharjah, opened the museum on 5 June 2008. 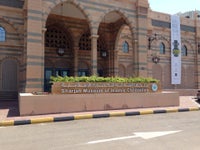 this museum is a little boring.

If you have been to Sharjah Museum of Islamic Civilization, share your experience