Commonly known as Lorong Shrine, Sui Boon Tong was founded only about three decades ago by a group of 'entranced horses' or mediums. Comparing to other shrines on island, Lorong is quite simple.

It's basically a yellow shop-house that is visible from the roadside. Despite its appearance, it is counted among the most important shrines during the annual Vegetarian Festival. 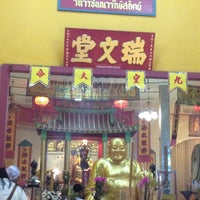 If you have been to Sui Boon Tong Shrine, share your experience