Unless you were raised in a cave, you've undoubtedly heard of L.A.'s Sunset Boulevard. The most famous of the city's many legendary boulevards, it winds dozens of miles over prime real estate as it travels from Downtown to the beach, taking its travelers on both a historical and microcosmic journey that defines Los Angeles as a whole -- from tacky strip malls and historic movie studios to infamous strip clubs and some of the most coveted zip codes on earth. In fact, driving the stretch from Hollywood to the Pacific should be required for all first-time visitors because it is such a good example of what L.A. is all about: instant gratification. Bam! From the start, you'll see the Saharan Motor Hotel, of many a movie shoot; the Guitar Center's Hollywood RockWalk, where superstars like Chuck Berry, Little Richard, Santana, and the Van Halen brothers left handprints or signatures; the "Riot Hyatt," where the Doors, Led Zeppelin, and Guns N' Roses crashed and smashed from the '60s through the '80s; and Chateau Marmont, where Greta Garbo lived and John Belushi died. Phew! And you've barely even started. Once you pass the Chateau Marmont, you're officially cruising the Sunset Strip -- a 1 3/4-mile stretch of Sunset Boulevard from Crescent Heights Boulevard to Doheny Drive. The tour continues with the Comedy Store, where Roseanne, Robin Williams, and David Letterman rose to stardom; Dan Aykroyd's ramshackle House of Blues, where the rock stars still show up for an impromptu show; the Sunset Tower Hotel, where Clark Gable, Marilyn Monroe, and John Wayne once lived; the ultraexclusive Skybar within the Mondrian hotel; Johnny Depp's Viper Room, where River Phoenix overdosed in 1993; Whisky A Go-Go, where the Doors were once a house band; and the Rainbow Bar & Grill, where Jimi Hendrix, Bruce Springsteen, and Bob Marley became legends. Once you emerge from the strip, things calm down considerably as you drive through the tony neighborhoods of Beverly Hills, Bel Air, Brentwood, and Pacific Palisades. By the time you've reached Malibu and the beach where Baywatch was filmed, you'll have seen a vivid cross section of the city and have a pretty good idea of what L.A. is all about. 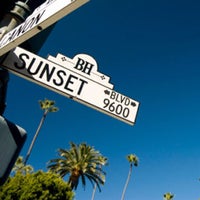 If you have been to Sunset Boulevard & The Sunset Strip, share your experience