See all Things to do in Xian

The Tang Dynasty Show showcases the costumes, music, and dancing of China's golden age: the Tang dynasty (618 - 907). The show begins with an ancient Chinese musical instrument ensemble while you dine and then later the cultural dance segment begins. The costumes are splendid and you can get some really nice photos if you sit near the stage. The Tang Dynasty Show you are going to see is performed by Shaanxi Song & Dance Troupe with a long history and renowned reputation, and also is the largest performing group in western China. This group has become the cultural window to the world of the ancient capital Xian. Shaanxi Song and Dance Troupe boasts a powerful staff of artists. The young performers are highly gifted and have also recieved rigorous training in the arts since 1982. It initiated the first show of song and dance in the imperial style of the Tang Dynasty. Shaanxi Song and Dance Troupe has performed in over 40 foreign countries and has received government heads of state and VIPs from over 100 countries. It is reputed to be the oriental art and treasure of distictive songs and music in the Tang Dynasty style. 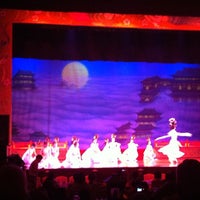 If you have been to Tang Dynasty Show (optional dinner), share your experience