See all Attractions in Kanyakumari 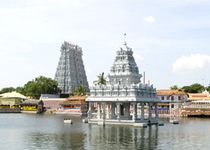 If you have been to Thanumalayan Temple, share your experience

Top things to do in Kanyakumari

Best places to eat in Kanyakumari

Must see in Kanyakumari