The Kerala Government Secretariat, is the one of the most recognizable icon of the city. Built as Huzur Kacheri (Secretarial Offices in Malayalam) in 1860, to serve as the Royal Durbar Hall of Travancore Kingdom, this building is a super-imposing structure. The building was designed by British Royal Engineers Corps combining Roman-Dutch-English-Kerala architectures, a testimony of Kerala's past influences with Roman, Dutch, English. The old Legislature Assembly Hall inside the complex (Asia's first native legislature assembly)is a good museum with a detailed gallery that depicts the history of Travancore Legislature Assembly. Other areas of this building are not of tourist interest, as they are government offices. 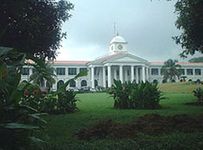 If you have been to The Kerala Government Secretariat, share your experience