Over 30 years later, they are still applying these sound basics in Spice House Cafe. Opened in 1993,  Spice House Cafe  followed in the footsteps of Stuffys, their first venture in  San Diego , which was destroyed by fire. In an environment where trendy new restaurants  come and go in 6 months, the tried and true approach of " just good food " has become more than just a motto - it has become a promise. 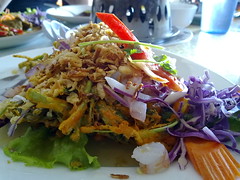 If you have been to The Spice House restaurant, share your experience

Top things to do in Kullu

Best places to eat in Kullu

Must see in Kullu