See all Things to do in Khandala

It was the onset of monsoon 2012 and the weather had gone through a miraculous change from 5 to 6 days and as forecasted there were small showers around early June 2012. 10th June 2012, was the Sunday when we had decided to go trekking into the Ulhas Valley which is in Khandala. My day began at 4.30 am when I woke up to see the wet streets from the window of my bedroom and a cool breeze coming from the outside dark due to the overnight rain. In all we were 12 people from Mumbai and suburbs around. So we decided to meet at Dadar Railway Station near Swaminarayan Mandir at 7.30 am. At the Dadar TT we took a sumo, which we booked for a negotiated sum of 2000 Rs. for a one way ride which seemed pretty fair for 12 people. But getting 11 people plus the Driver in a sumo was a herculean task which we somehow managed to do, after spending a good 10 minutes or so on permutations and combinations and finally getting a hard talk from the driver, most of us are MBAs you see. Only one member was to board at Panvel. The journey began at about 8.00 am and the weather was helping our cause as it was overcast. As we passed by, many other peaks near Panvel caught our sight and we started re-living and sharing memories of those treks. It started raining pretty heavily and got cooler, much needed inside the packed sumo. Within no time we reached the food court where we waited for a little break. A further journey of about an hour came to an end at the Khandala exit where we got down and paid the money to the driver. 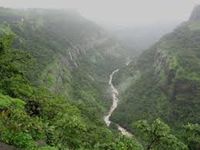 If you have been to Trek to Ulhas Valley, Khandala, share your experience

Top things to do in Khandala

Best places to eat in Khandala

Must see in Khandala