Both Uluru and Kata Tjuta are considered sacred places by the Aboriginies. The land is owned by the Anangu, leased by the government and jointly managed by the Anangu and the Australian parks and management services and visitors will notice efforts throughout the area to include and encourage respect for the Anangu perspective on the land.Much of Kata Tjuta is off-limits, for example, and climbing Uluru is strongly discouraged by sign-posts. (A few areas around the base of Uluru are intended to be off-limits for photography, although there is no problem with it throughout most of the park.) In practice, however, the daily management of the parks is handled by members of the Australian parks department. 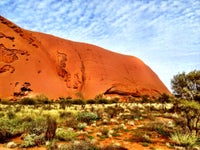 If you have been to Uluru-Kata Tjuta National Park, share your experience

Top things to do in Alice Springs

Must see in Alice Springs