The Vaikom Mahadeva Temple is a temple for the Hindu god Shiva in Vaikom, Kerala. The temple, along with Ettumanoor Siva Temple, Kaduthuruthy Thaliyil Mahadeva Temple is considered a powerful trisome. The belief is that if a devotee worships at these three temples before 'Ucha pooja', all the wishes are fulfilled.
The Vaikom Mahadeva temple is one of the few temples which is held in reverence by both Shaivaites and the Vaishnavaites. Vaikom's Shiva is fondly called Vaikkathappan. The Shiva Linga here is believed to be from the 'Treta yuga' and considered as one of the oldest temples in Kerala where pooja has not been broken since inception. 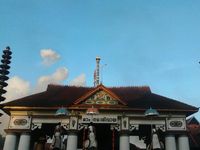 If you have been to Vaikom Mahadeva Temple, share your experience

Top things to do in Kumarakom

Best places to eat in Kumarakom

Must see in Kumarakom