See all Attractions in Mahabalipuram

Varaha Cave Temple is a rock-cut cave temple located at Mamallapuram, on the Coromandel Coast of the Bay of Bengal in Kancheepuram District in Tamil Nadu, India. It is part of the hill top village, which is 4 kilometres to the north of the main Mahabalipurm sites of rathas and the Shore Temple. It is an example of Indian rock-cut architecture dating from the late 7th century. The temple is one of the finest testimonial to the ancient Vishwakarma Sthapathis, of rock-cur cave architecture, out of many such caves also called mandapas. Part of the Group of Monuments at Mahabalipuram, the temple is a UNESCO World Heritage Site as inscribed in 1984 under criteria i, ii, iii and iv. The most prominent sculpture in the cave is that of Lord Vishnu in the incarnated form of a Varaha or boar lifting Bhudevi, the mother earth goddess from the sea. Also carved are many mythical figures. 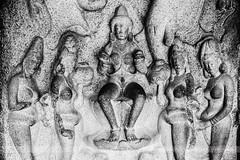 If you have been to Varaha Cave, share your experience

Top things to do in Mahabalipuram

Best places to eat in Mahabalipuram

Must see in Mahabalipuram