See all Lakes in Alleppey

One of the largest lakes in India, the Vembanad Lake is India's longest lake and also the largest lake in all of Kerala. The districts of Allepey, Kottayam and Ernakulam border the lake. The Vembanad Lake is at the centre of Kerala Backwaters tourism with a myriad ketuvallams (houseboats) crowding it. There are several other reasons which attract tourists to the beautiful lake, in and off season. The town of Allepey, bordering the lake, is considered to be the Venice of the East because of the large network of canals that amble through the town. Also, the Vallam Kali (the Snake Boat Race) held annually in August is a major attraction. 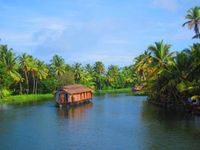 If you have been to Vembanad Lake, share your experience

Top things to do in Alleppey

Best places to eat in Alleppey

Must see in Alleppey