See all shopping in Rome

Via Giulia is a street in the historic centre of Rome, Italy, mostly in rione Regola, although its northern part belongs to rione Ponte. It was one of the first important urban planning projects in Renaissance Rome.Via Giulia was designed by Pope Julius II but the original plan was only partially carried out. This was the first attempt since Antiquity to pierce a new thoroughfare through the heart of Rome and the first European example since Antiquity of urban renewal. Via Giulia runs from the Ponte Sisto to the church of San Giovanni dei Fiorentini, following the tight curve of the Tiber. It became the most fashionable street for new construction for borghesi and for the Florentine community in the sixteenth century. Today its modest structures provide one of Rome's elite shopping streets, noted for its antique shops. 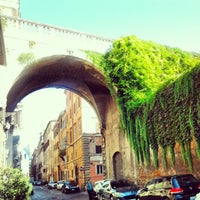 Travelers also viewed these places similar to Via Giulia

If you have been to Via Giulia, share your experience