Taman Sari also known as Taman Sari Water Castle is a site of a former royal garden of the Sultanate of Yogyakarta. It is located about 2 km south within the grounds of the Kraton, Yogyakarta, Indonesia. Built in mid 18th century, the Taman Sari had multiple functions, such as a resting area, a workshop, a meditation area, a defense area, and a hiding place.
Taman Sari consisted of four distinct areas: a large artificial lake with islands and pavilions located in the west, a bathing complex in the centre, a complex of pavilions and pools in the south, and a smaller lake in the east. Today only the central bathing complex is well preserved, while the other areas have been largely occupied by the Kampung Taman settlement.
Since 1995 the Yogyakarta Palace Complex including Taman Sari is listed as a tentative World Heritage Site. 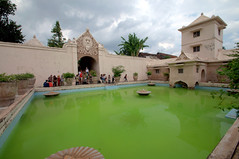 If you have been to Water Castle (Tamansari), share your experience

Top things to do in Yogyakarta

Best places to eat in Yogyakarta

Must see in Yogyakarta