Al Hisn Sharjah Fort is located in the center of Sharjah city. It was built in 1820 by the late Sheikh Sultan bin Saqr Al Qasimi. The Fort is a real masterpiece of old Arab architecture. The building was once partially removed as part of some structural changes the city of Sharjah had undergone during 1969 period. 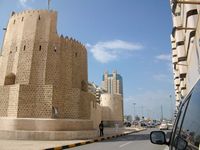 If you have been to Al Hisn Fort, share your experience