See all Attractions in Alleppey

The Alappuzha Lighthouse is situated in the coastal town of Alappuzha, Kerala. It was built in 1862 and is a major tourist attraction. Most of the information for this section has been obtained from and Alappuzha, the place where India's Alleppey Lighthouse stands, was one of the busiest ports and trade centers of Kerala. The Alappuzha lighthouse, one of the oldest lighthouses on the south-west coast of the country, is preparing to celebrate its 150 year in an impressive way. 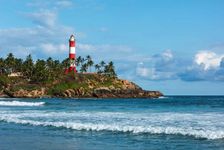 If you have been to Alleppey Light House, share your experience

Top things to do in Alleppey

Best places to eat in Alleppey

Must see in Alleppey