The Alorna fort is situated in the village of Alorna which is about 30 km from Mapusa and 10 km east off NH 17 from Malpem in Pernem. It was built by the Bhonsles of Sawantwadi in the 17th century. The fort had four guns and in the year 1746, the fort was captured by Marquis of Castello Novo (later known as Marquis of Alorna) from the Bhonsles. The possession however was short lived. In 1781, the fort was again captured by Dom Frederico Guilherme de Souza. It was used to defend against the Maratha attacks from the north. The fort is presently in a dilapidated condition. It is however a beautiful site to explore as it is perched on the banks of the river Chapora as it flows peacefully towards Colvale. 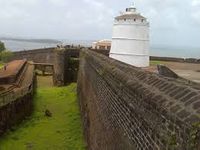 If you have been to Alorna fort, share your experience