Aventine Hill is one of Rome's famous seven hills. It's the southernmost hill, located on the eastern bank of the Tiber River. This hill is important in the myths involved with the founding of Rome. The brothers, Romulus and Remus, each chose one of the area's hills on which to found a city. Remus chose the Aventine Hill, but it was his brother Romulus (set up on the nearby Palatine Hill) who saw more signs (supposedly from the gods) and who goes on to found the city of Rome. 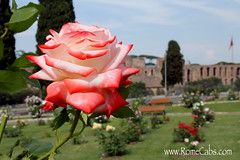 If you have been to Aventine Hill, share your experience