Kashi Vishwanath Temple  ( Hindi :  काशी विश्वनाथ मंदिर ) is arguably the most famous of all  Hindu temples  and is dedicated to  Lord Shiva . It is located in  Varanasi ,  Uttar Pradesh ,  India , the holiest existing place of  Hindus , where at least once in life a Hindu is expected to do pilgrimage, and if possible, also pour the remains of cremated ancestors into the  River Ganges . The temple stands on the western bank of the holy river Ganges, and is one of the twelve  Jyotirlingas , the holiest of  Shiva  temples. The main deity is known by the name  Vishwanatha  or Vishweshwara  meaning  Ruler of the universe . The temple town, which claims to be the oldest living city in the world, with 3500 years of documented history, [1]  is also called  Kashi  and hence the temple is popularly called  Kashi Vishwanath Temple . 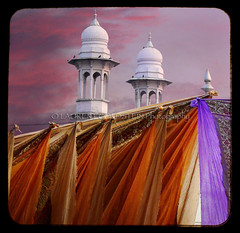 If you have been to Golden Temple (Kashi Vishwanath), share your experience