Scindia Ghat  (also called Scindias and Shinde) borders Manikarnik,  India  to the north, with its  Shiva  temple lying partially submerged in the  Ganges  River as a result of excessive weight of the  ghats ' construction, about 150 years ago. The ghat is named after the  Scindias , whose built it. Above the ghat, several of  Kashi 's most influential  shrines  are located within the tight maze of alleys of Siddha Kshetra (Field of Fulfillment). According to  mythology ,  Agni , the Hindu  God of Fire was born here. Hindu devotees propitiate at this place to Vireshwara, the Lord of all heroes, for a son. 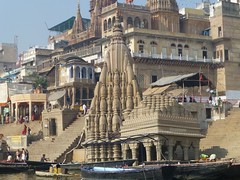 If you have been to Scindia Ghat, share your experience