Kalaripayattu-the  oldest of Martial - is a gift to the modern world and known as the mother of all martial arts.Legend traces the 3000-year- old art form to Sage Parasurama- the  master of all martial art forms and  credited to be the re-claimer of Kerala from the Arabian Sea. Kalaripayattu originated in ancient South India. At Kadathanadan Kalari Centre, Thekkady, this Martial Art is performed in kuzhikalari .A highly desingned gallery has been built in such a way that the viewers will get a clear vision from a safer seat. 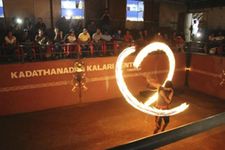 If you have been to Kalaripayattu - Local Martial Art Show, share your experience

Top things to do in Thekkady

Best places to eat in Thekkady

Must see in Thekkady