Khao San Road where the worlds young travellers meet.
Khao San Road is a favourite crossroads for the young travellers on a budget. It has evolved over the last two decades from just one small hostel providing low-budget accommodation become one of the worlds most well-known destinations. It has been featured in many movies and television documentaries.
During the day, Khao San Road is the scene for back-packers looking for a cheap room while others are arranging transport to their next destination in Thailand or overseas. Some will be just chatting with friends over a cup of coffee or a bowl of noodles.
At night, it turns into a lively thoroughfare lined with street stalls selling cheap clothes, handicrafts, souvenirs and thousands of other items. The lights are on at the many bars where the travellers tell tales of the days adventures and discoveries and the plans for tomorrow. Khao San Road is not just for foreign travellers, many young Thai people like to hang out there, including members of the TV and film production industries.
The location is very convenient for visiting the many tourist attractions on Rattanakosin Island. It is just a 10-minute walk to Sanam Luang and The Grand Palace.
During April when Thais celebrate the Songkran Festival, Khao San Road becomes a fun-filled battleground as everyone, Thais and foreigners indulge in splashing each other with water.
The area is also well-known for the wide variety of inexpensive food. This ranges from spicy Thai Tom Yum Gung soup to the ever-popular banana pancake. 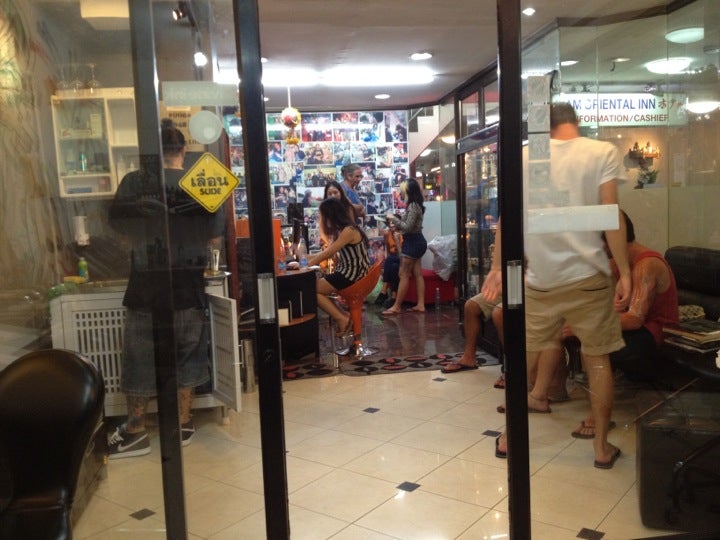 If you have been to Khao San Road, share your experience