See all Attractions in Langkawi

During the time of the powerful Sultanates of the Malay archipelago there lived a young woman named Mahsuri. She was the most beautiful woman in all of Langkawii, and the wife of Wan Darus, a brave warrior. As was required of him, her husband had to go to war, leaving Mahsuri behind to fend for herself. It was during this time that Mahsuri befriended a young man named Deraman.

Their close friendship lead others in her village to believe that their relationship was sexual in nature. Some versions of the legend claim that the parties who perpetuated the gossip were those who were envious of Mahsuri's beauty. Eventually the rumours grew strong enough that the villagers openly accused her of adultery. Mahsuri pleaded her innocence, but no one believed her.

Following the old Hudud punishment for adultery, Mahsuri was to be tied to a tree (or pole) and stabbed to death. When they stabbed her, white blood flowed from her wound, signifying her innocence. With her dying breath, Mahsuri cursed Langkawi to have seven generations of bad luck. 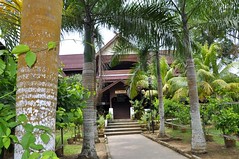 If you have been to Mahsuri's Tomb, share your experience