Old Manila Walks operates on a simple principle: to have you experience the best of historic Manila - one step at a time. It's a lure to an urban adventure, a cultural loop or just a plain simple exercise for your body and soul. Churches, temples, wet markets, historic homes, traditional shops, city walls, alleys, esteros and graveyards. You name it, we have it. Fort Santiago, is a citadel first built by Spanish conquistador, Miguel López de Legazpi for the new established city of Manila in the Philippines. The defense fortress is part of the structures of the walled city of Manila referred to as Intramuros. The fort is one of the most important historical sites in Manila. Several lives were lost in its prisons during the Spanish Colonial Period and World War II. José Rizal, the Philippines' national hero, was imprisoned here before his execution in 1896. The Rizal Shrine museum displays memorabilia of the hero in their collection and the fort features, embedded onto the ground in bronze, his footsteps representing his final walk from his cell to the location of the actual execution. The City of Makati, in the Philippines, is one of the sixteen cities that make up Metro Manila. Makati is the financial center of the Philippines, it has a highest concentration of multinational and local corporations in the country. 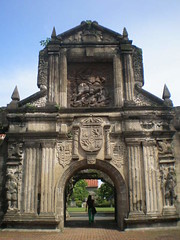 If you have been to Manila Old and New - Intramuros, Fort Santiago and Makati City, share your experience

Top things to do in Manila

Best places to eat in Manila

Must see in Manila