The Similan Islands  is a group of islands in the Andaman Sea off the coast of, and part of, Phang Nga Province, southern Thailand. It is a national park which was established in 1982.
Similan Islands National Park was established after a one-year exploration by the forestry department. The park is an archipelago consisting of nine islands named Ko Bon, Ko Bayu, Ko Similan, Ko Payu, Ko Miang (two adjoining islands), Ko Payan, Ko Payang, and Ko Huyong. Recently, the park was expanded to include two remote islands named Ko Bon and Ko Tachai. The Similans are situated 70 kilometres from Phang Nga town. "Similan" is a Yawi word which means "nine". Similan is one of the most famous diving sites in Thailand, and is noted as one of the top ten dive destinations in the world according to the National Geographic Society. 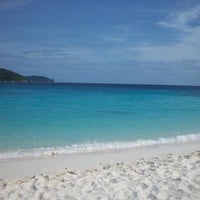 If you have been to Mu Ko Similan National Park, share your experience