The Sharjah Museum of Islamic Civilization was renovated and re-opened in 2008 as a significant tourist landmark in the region, and the first of its kind in the UAE. Situated right at the historical heart of Sharjah on the Majarrah Waterfront, this fascinating Museum started its life as a traditional Middle Eastern souq or indoor market. The museum's predecessor was called the Islamic Museum, and was situated in one of the heritage houses in the Heritage Area. It was established in 1996, and continued to receive visitors until 2007, before transferring to its new location as the Sharjah Museum of Islamic Civilization. Sharjah Museum of Islamic Civilization is a fascinating place for any visitors with an interest in the faith, as there are handwritten Qur'ans, letters from the Prophet Muhammad to other leaders and various artifacts from Mecca itself. Also a comprehensive display of Arab handicrafts. Adult: AED 5, Family: AED 10, Children: Free. 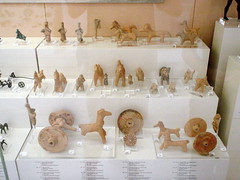 If you have been to Museum of Islamic Civilization, share your experience