See all Things to do in Jaipur

Jaipur is a major tourist attraction amongst Indian as well as international travellers. It belongs to the tourist Golden Triangle of Delhi, Jaipur and Agra. It hosts several attractions like the City Palace, Govind Dev ji Temple, Vidhan Sabha, Birla Temple, several massive Rajput forts and so on. It also serves as a stepping stone for travelers heading to the desert cities of Jodhpur and Jaisalmer. The town planning and infrastructure development in Jaipur is quite above the mark relative to many other Indian cities. Jaipur is often called the Pink City in reference to its distinctly coloured buildings, which were originally painted this color to imitate the red sandstone architecture of Mughal cities. The present earthy red color originates from repainting of the buildings undertaken for a visit by the Prince of Wales in 1876.In night time you can see the beautiful light decoration in many place like Mahal (Front View), Amber Fort and Nahargarh Fort. 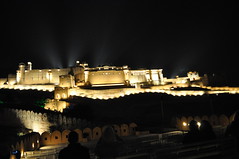 If you have been to Pink City by Night Tour, share your experience

Top things to do in Jaipur

Best places to eat in Jaipur

Must see in Jaipur