The Poring in Poring Hot Springs is in fact the Kadazan word for "Bamboo".  Thus, the true English translation of the Malay  "Poring Air Panas" should be "Bamboo Hot Springs". However, nobody bothered, hence forth it is known as Poring Hot Springs.  Back in the day, oh say, a million years or so ago, Mt. Kinabalu must have been an active volcano.  If you've ever been to the summit, you will see the obviousness of this statement there. Today, Poring Hot Springs is the only evidence left of its former thermal self.  During its history, Sabah, or North Borneo as it was previously called, was invaded and occupied by the Japanese.  During the Second World War, Prisoners of War were commissioned to harness the previously natural setting at this location and it was turned into Japanese style hot tubs.  I am unsure as to whether or not the facilities today are the original structures, but the Japanese style has been retained nevertheless. As such, the hot tubs are built slightly below the actual source of the hot water.  The hot water is piped (as at the source it is hot enough to hard boil eggs) and presented at the tubs along side a cold water tap.  Due to reasons of hygene, the tubs are drained after each use, but they are also fairly large and thus sometimes take some time to fill.  There are several other sized tubs scattered about nearby, which are not tiled and communal.  Hot water flows freely through these and are always at the ready. 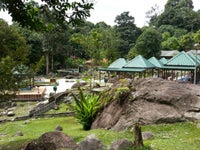 If you have been to Poring Hot Springs, share your experience