See all Attractions in Kuala Lumpur

Gombak is an administrative district (Malay: Daerah Pentadbiran) located in the state of Selangor, Malaysia. The district was created on February 1, 1974, the same day when Kuala Lumpur was declared a Federal Territory. Until 1997, Rawang was the district capital; the capital has been moved to Bandar Baru Selayang. Gombak borders Kuala Lumpur to the southeast and the Genting Highlands to the east. Both Gombak and Kuala Lumpur, along with some other districts in Selangor, are situated within the Klang Valley.

The International Islamic University Malaysia (IIUM/UIAM) main campus is also located here as well as the Batu Caves. Gombak is also home to an aboriginal Orang Asli settlement, and it is the site of the National Aboriginal Museum, Orang Asli Museum and Mimaland, a recreation park which has operated between 1975 to 1994. 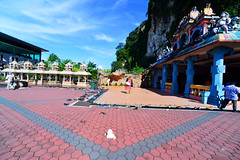 If you have been to Sri Gombak, share your experience