The Tomb of Mahsuri

There was initially no shrine or a gravestone for Mahsuri. However in order to commemorate her death and such an incident of historical significance, District Officer Abdul Rahman took the initiative and built a modest tomb in the premises with slabs of white marbles. Mr. Rahman later became the first Prime Minister of Malaysia in 1957 after the country's independence. 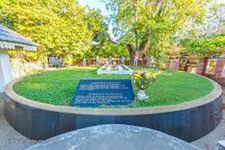 Travelers also viewed these places similar to The Tomb of Mahsuri

If you have been to The Tomb of Mahsuri, share your experience