Bhrigu is one of the most picturesque alpine lake in the Kullu valley. Bhrigu Lake is a popular water body holding religious significance to the Hindus. Like most Himalayan lakes this lake too is considered sacred. It appears magically before you as you ascend the trail and takes you by surprise. The lake is nestled amid the Great Himalayas and its banks are believed to be the site where Rishi Bhrigu, one of the seven renonwed sages of the Hindu religion, meditated while residing on the Earth. It is also believed that this was the site where he wrote the Bhrigu Samhita, an astrological manuscript with predictions of the future and records of the past. A natural spring known as the Nehru Kund, which is fed by the Bhirgu Lake, adds to the attraction of the place. 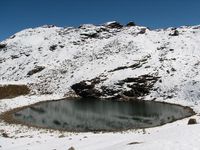 If you have been to Bhrigu Lake, share your experience