The Beas River  is a river in the northern part of India. The river rises in the Himalayas in central Himachal Pradesh, India, and flows for some 470 km (290 miles) to the Sutlej River in the Indian state of Punjab. Besides affording a magnificent view of the snow-clad mountains of Lahaul, this pass is also the source of the river Beas. This river while fulfilling the thirst of many local travellers, also quenches the thirst of the fields of Punjab and Pakistan before flowing into the Arabian Sea. Thr river emerges from a cavern at the Rohtang pass and assume different identities as the seasons go by. From a clear blue easy flowing mountain river to an awesome torrent during the monsoon. 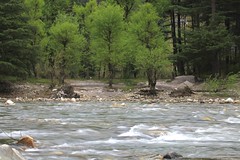 If you have been to River Beas, share your experience