The Pandoh Dam is an embankment dam on the Beas River in Mandi district of Himachal Pradesh, India. Under the Beas Project, the dam was completed in 1977 and its primary purpose is hydroelectric power generation. Part of a run-of-the-river power scheme, it diverts the waters of the Beas to the southwest through a 38 km (24 mi) long system of tunnels and channels. The water is used for power generation at the Dehar Power House before being discharged into the Sutlej River, connecting both rivers. The power house has an installed capacity of 990 MW. 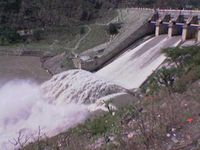 If you have been to Pandoh Dam, share your experience