Full Day Sightseeing tour to Lamayuru Monastery and Alchi Gompa. Lamayuru monastery is the oldest and one of the largest monasteries in Ladakh region in Jammu and Kashmir.The monastery is famous for its rich wall paintings, collection of thangkas, murals, scriptures and statues of different forms of Buddha and other deities. Alchi Gompa is the only remaining specimen of Indian Buddhist Iconography, which flourished in this region before Tibetan influences started gaining strength. Also called as Alchi Choskor, this complex dates back to the year 1000 AD and was built by translator, Rinchen Zangpo. 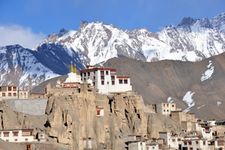 If you have been to Full Day Sightseeing Tour(Lamayuru Monastery & Alchi Gompa), share your experience