Full Day Sightseeing tour to Shanti Stupa and Leh Palace. Shanti Stupa is situated on a hilltop in Chanspa, Leh district, Ladakh, in the north Indian state of Jammu and Kashmir. Shanti Stupa as know Buddhist white-domed stupa. Situated on one side of the dry, dusty Namgyal (Tsemo) hill, Leh Royal Palace was built by one of the greatest monarch to have reigned over Leh, Sengge Namgyal. While construction was initiated in 1553 by Tsewang Namgyal who established the dynasty, Leh Royal Palace was eventually completed in the 17th century at a time when Namgyal dynasty was at its zenith, and has since outlived all the monarchies and forces that ruled Leh at different times. To visit one of the few royal remnants of the glory of Namgyal dynasty, head to Leh Palace. 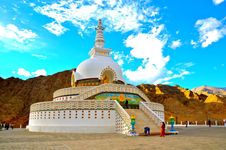 If you have been to Full Day Sightseeing Tour(Shanti Stupa & Leh Palace), share your experience