Safari World is a sightseeing in Bangkok, Thailand that consists of two parks named Marine Park and Safari Park, operated by Safari World Public Company Limited. The park was opened in 1988 with a total area of 480 acres (190 ha) for its open zoo and 180 acres (73 ha) for its bird park. Now this Safari World consists of an open zoo and a marine park on 500 rai (approx. 200 acres) of land. The Marine Park houses a vast spectrum of animals of land, sea and air. The attractions are Jungle Cruise river ride, a water flume ride through the jungles of Africa and Asia, 7 exciting shows daily, spectacular Spy War action stunts, water skiing, dolphins, Hollywood cowboy stunts, birds, orang-utan boxing, and sea lions, hundreds of exhibits featuring white tigers, fantasy carp garden, tapir kingdom, crocodile garden and many more. 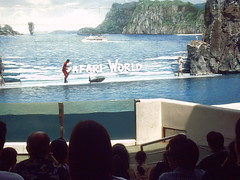 If you have been to Safari World, share your experience