Villa Isola (now Bumi Siliwangi) is an art-deco building in the northern part of Bandung, the capital of West Java province of Indonesia. Overlooking the valley with the view of the city, Villa Isola was completed in 1933 by the Dutch architect Wolff Schoemaker for the Dutch media tycoon Dominique Willem Berretty, the founder of the Aneta press-agency in the Dutch East Indies. The original purpose of the building was for Berretty's private house, but then it was transformed into a hotel after his death and now it serves as the headmastership office of the University of Education Indonesia. 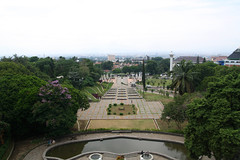 If you have been to Villa Isola, share your experience

Top things to do in Bandung

Best places to eat in Bandung

Must see in Bandung