Full day Sightseeing tour to Gurudwara Patthar Sahib, Confluence of the Indus and Zanskar Rivers, Likir Monastery, Ridzong Monastery and Magnetic Hill. Gurudwara Pathar Sahib has a fascinating legend to it.In the land of Buddhism and beautiful serene monasteries, the appearance of a Gurudwara on the Leh-Nimu road will make you peer closely to ensure you are seeing right. The Indus runs through entire Ladakh & you feel a sense of respect for this stream of water that is the lifeline of the people of Ladakh, especially since Ladakh experiences a rainfall of only 2-3 inches/year. The Likir Monastery or gompa is one of the oldest and well maintained monasteries in Ladakh district in Jammu and Kashmir. The monastery is located in Likir village is believed to have been in existence since 11th century. Magnetic Hill is a gravity hill located near Leh in Ladakh, India. The hill is alleged to have magnetic properties strong enough to pull cars uphill and force passing aircraft to increase their altitude in order to escape magnetic interference, in reality, the effect is an optical illusion created by the gravity hill. 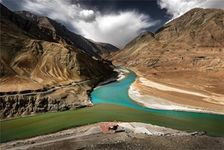